If you have IBS, you are very much not alone. It is estimated that 10 – 15% of the population worldwide suffer, and yet many are not even aware that their conditions relate to IBS. 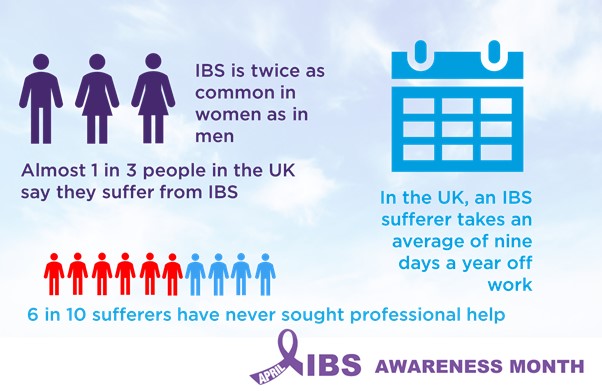 To bring more awareness to Irritable Bowel Syndrome, we have collected some of the most interesting (and surprising) stats which we hope you might share on your social networks.

IBS affects people of all ages, even children The most common age is between 20 – 30.

It generally takes someone two to three years to be accurately diagnosed with IBS This is said to be mainly due to any perceived stigma regarding symptoms.

IBS is twice as common in women as in men Symptoms also seem to increase during menstrual periods.

IBS is said to cost the UK economy £800,000 a year in terms of lost productivity IBS causes as much absence from work as colds or flu.

Globally, the economic cost of IBS could be as much as $21 billion worldwide In the US alone, there are between 2.4 to 3.5 million doctor visits every year.

In the UK, an IBS sufferer takes an average of nine days a year off work 4 in 10 sufferers will regularly take time off work due to their symptoms.

6 in 10 sufferers have never sought professional help Due to any embarrassment associated with IBS… we hope this can change soon, your health professionals will not judge you.

The statistics show a number of things: IBS is maybe more common than you might have thought, The cost of IBS is huge – both to the economy but more importantly, each person’s quality of life and mental wellbeing, and that some people have never discussed their symptoms with their GP.

Alison Reid, The CEO of The IBS Network says: “IBS affects between 10 and 20% of the population, that’s about 12 million people. The condition can mean feelings of isolation through an inability to leave the house for fear of an accident, cancelled holidays, and days off work. The stress caused by the distress of these symptoms, worry of losing job, the humiliation of an accident, can make the condition worse; which creates a vicious circle. Our members have reported that talking openly about their condition with people who understand really helps them break this cycle supporting them in taking control of their IBS.”