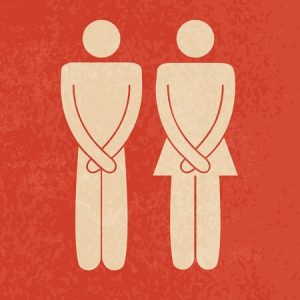 While there are no obvious anatomical differences between men and women’s intestines, there do seem to be some differences in expressions of IBS (irritable bowel syndrome) and IBS symptoms in men and women. These differences are, however, usually based on how this illness is experienced and how patients respond to treatment.

IBS Symptoms in Men and Women

Some of the most common IBS symptoms in men and women include:

Occasionally, sufferers may experience an urgency to visit the toilet or feel that their bowels have not been fully emptied after doing so.

Other IBS Symptoms in Men and Women

Obviously having a significant impact on sufferers’ day-to-day lives, IBS symptoms can also have deep psychological effects including anxiety and depression.

It has been suggested that men’s guts may be less sensitive than those of women. The speculation behind this suggestion is that gut sensitivity may be increased by hormones like oestrogen, for example.

It appears that hormonal effects can make a difference in women. Gastro-intestinal symptoms have been described as more intense just before and during their menstrual cycle by both women with and without IBS.

Gender differences in terms of hormone activity within the intestinal-activity-regulating enteric nervous system and its connection to a person’s central nervous system do, however, require (and deserve) a great deal more study before definitive answers can be provided.

Clinical studies of IBS have included few men. As a result, a valid comparison between the psychological effects of IBS in men and women cannot be made. Psychosocial differences (i.e. men’s resistance and hesitance to seek and comply with medical advice) may serve as an explanation why doctors see fewer cases of IBS symptoms in men than in women.

Diagnostic criteria have in the past appeared to be less effective in the diagnosis of IBs in men. Abdominal distension, for instance, was at one point one of the symptoms required to diagnose this illness. As it is more prevalent in women, fewer men would subsequently meet the criteria. More current criteria like Rome III are therefore aiming to be gender neutral.

There are several reasons to suggest that men respond differently to treatment than women. Certain opiates, for instance, provide men with less pain relief (post-operative) than women. Men also appear to experience fewer of the side effects of drugs. There are also suggestions that women respond better to hypnotherapy than men.

All said and done, IBS symptoms in men and their often distressing, disabling effects are as common as they are in women and, regardless of whether you are male or female, it is important to seek medical advice; get the treatment you need and make any necessary lifestyle changes (avoiding certain foods; reducing stress, etc.) as soon as possible.

2 thoughts on “Are IBS Symptoms in Men Different to Those in Women?”